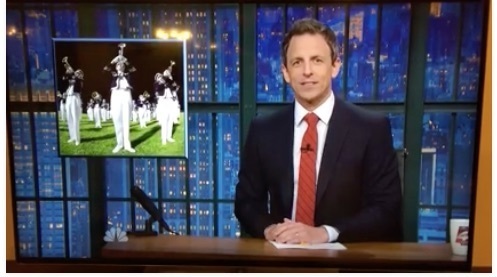 "Over one thousand clowns performed at this morning's Macy's Thanksgiving Day Parade. Said the clowns, 'we prefer to be called high school marching bands."

Last year we heard from Jim Rome who proclaimed that college marching band kids were "dorks." He was out of line and he raised the ire of thousands.

But Meyers is worse.

Why? Because while Rome was tweeting off the cuff, Meyer's monologue was written, edited, and approved by a team of people in advance. It was a premeditated joke at the expense of hard working high school students. Kids. Rome didn't think, but Meyers and his team clearly did...and rolled with it. It wasn't funny, it was demoralizing. Who does that? Are radio and TV personalities that desperate for material that the integrity of kids is somehow fair game these days? Is there nothing left to joke about when it comes to adults?

Meyers is already spinning the pushback to his advantage. He has "apologized" on Twitter (without admitting why he was out of line) and will likely be featuring some marching band kids who "get back at him" on his show. Lovely. 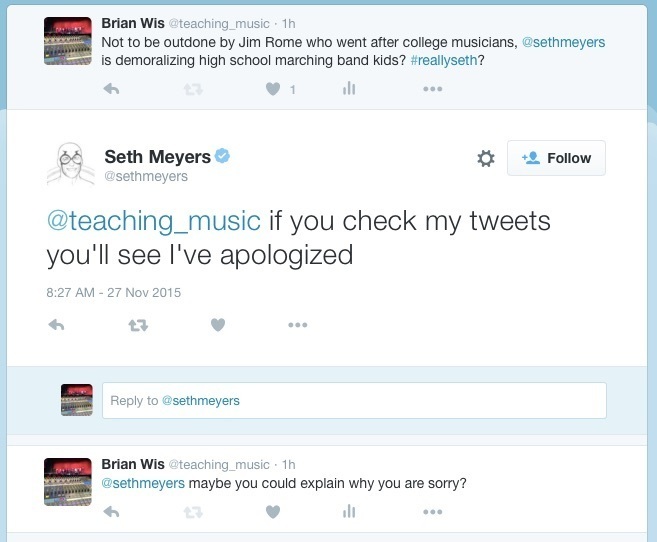 Look around you Seth, you have plenty of material in the 21 and over crowd. Leave the kids alone, especially those who are working so hard to bring a little holiday joy to you and your family on Thanksgiving morning.

Afterword: To those stating "it's just a joke" or "kids need a thicker skin" I'd ask that you think more carefully about that. Joking about adults is (in most cases) OK. High school kids? No.

Where is the humor in labeling the hard work of children clowning around? But the saddest thing is, if people didn't believe it (even if just a little) it wouldn't have gotten a laugh. If the punch line had been "kids on the Sesame Street float" I think there would have been confused silence. But marching bands....that's funny...clowns with horns. Music Educators need to think about why that is so, and stand up for their hard working students.