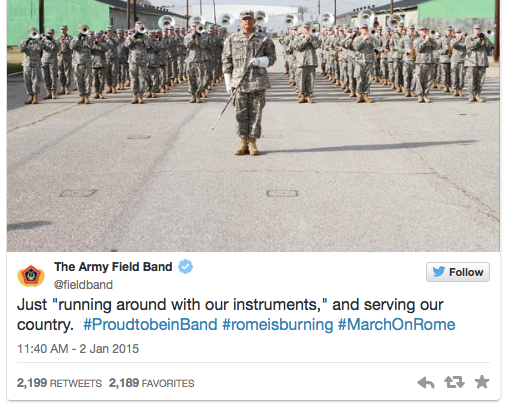 Like many band teachers out there, I enjoy watching bowl games for several reasons. For one, I'm a college football fan. But I also enjoy watching the halftime coverage of the college marching bands. They rarely get airtime during the regular season for more than a few seconds, so bowl games are a treat when the networks afford some time to the bands. Some of us see our former students out there on the field, and some of my friends used to march in those very bands. A few colleagues who are former members now have sons or daughters marching. For all who appreciate the performing arts it is a cherished moment to see young people carrying on the proud tradition of entertaining the crowd at halftime, representing their schools, and supporting their teams.

But for CBS Sports personality Jim Rome it was an opportunity to carry on a more infamous tradition...the bullying of non-athletes under the guise of kidding around. He tweeted (and has since deleted) the following to his more than one million followers during halftime at the Rose Bowl:

"Is there anyone not in a marching band who thinks those dorks running around with their instruments are cool?"

A rhetorical question with a clear air of superiority. After the subsequent backlash, he tweeted the following:

"Band nation - I hear you. I was out of line. I apologize. I do not condone bullying of any kind and that was not my intent."

Was he out of line? Absolutely. Did he offer an apology? Yes. But there's something about that last sentence. If Rome doesn't condone bullying of any kind, if his own words were not intended as such, then what exactly did he intend to communicate? Was this even an apology at all?
If you were a school musician in the not too distant past (i.e. when Rome was a student), Rome's demeaning tweet likely put a knot in your stomach and stirred up some uncomfortable memories. This was standard fare for us back then. Some have defended Rome, stating that he was simply making a joke. If you grew up being hassled about bringing your instrument on the bus, or being pushed around in the hallway because you were labeled a "band dork" or being mocked by football players while you were out practicing (in order to support them on a Friday night), you know differently. If you were on the dishing-out side of this equation at the time, comments like his might still roll off your tongue years later (to the thousands that retweeted or favorited his post, I'm looking your way). Some probably didn't even give his tweet a second thought after the laughter subsided. Just another funny joke at the expense of the band kids....hey when is halftime over?
But this wasn't simply a joke.
No, it was all too familiar alpha dog behavior aimed squarely at anyone who isn't an athlete, in this case the band kids; past, present, and future. Athletes are cool, musicians are dorks. Cute show, but don't forget the pecking order. Don't forget that what you dorks do pales in comparison to what the cool people do. Why are you even here? And all that stuff that was said (or done) to you back in the day? It lives on, and while the words may be hurtful to you they are hysterical to me and my buddies. That's the message he intended to send.
Message received Jim.
The problem for Rome is that while his intent is clear, we no longer accept it. Times have changed, Jim. Bullying is no longer viewed as just kidding around. And saying you didn't intend to "condone" bullying is a lot different than apologizing for being a bully. Your carefully-crafted words ring hollow. Those of us who grew up around this stuff know the difference. "You band kids are dorks...hey sorry you know I'm just kidding." If we heard it once, we heard it a hundred times, and it is no longer acceptable.
Kidding, or revealing?
Jim Rome has revealed himself to hundreds of thousands of musicians, teachers and parents. We see you much more clearly Jim, no need to apologize for that, we're cool.
(Followup article)
______________________________________
Afterword:
Many have since tried to convince Rome of band's "coolness" by posting videos of (fantastic) bands and drum corps, or pointing out the hours of preparation that go into a marching show, much of which can be very physically demanding. My favorite is the photo from the US Army Field Band (pictured above) which certainly makes the case for "cool." But truthfully, that's not what this is about. This is about respecting each other in this world, not making a case for "non-dork" status in the mind of a bully. Rome will never be convinced that band is cool, but I do believe he can be forced to change his behavior. This is about recognizing that there is no reason for putting others down. This a simple case of alpha dog behavior and it is unacceptable.
Rome is free to speak (reveal) his mind but we have an obligation to call him on his behavior. If we don't, then how will anything change? We don't change perceptions and behaviors in our society by allowing this sort of thing to go unchallenged. We don't ignore it, we don't respond by saying "I'm a proud dork" (a coping mechanism), we don't post threats or nasty words on his twitter account.... we address it. He is in the wrong to use his position of power in the media to demean student musicians. Period.
Everyone who works hard and believes in what he or she does deserves respect, especially those in the performing arts who serve others. To the bands at the Rose Bowl, and bands around the country that work hard week in and week out to provide entertainment to thousands, our thanks and admiration. We know the stigma perpetuated by Rome may be a reality for you (as it was for many of us when we were younger) but be proud of your work and know that we appreciate you.
_______________________________________
Addendum:
Apparently this is not Jim Rome's first rodeo when it comes to this type of behavior...broadcast transcription from 2009 (has since been deleted from his site). Note the use of similar demeaning language.
"You know where I come out on marching bands! The only people who like them are the people who are in them. And maybe their parents who “jammed their clarinets in their face” in the first place! But that’s not what the American College of Sports Medicine thinks…

According to their research, the “dorks” with the oboes and feathery plumes on their lids are working just as hard as the guys with facemasks and shoulder pads. Exercise physiologist Gary Granata says the performers are “…running around the field at very high velocities with heavy instruments while playing very difficult passages. At the top levels of marching band and drum corps, you get a level of competition and athleticism that is equal to a Division I athletic program.” Division I, what?! Backgammon?!

Yeah, because we all know how tough it is to nail the bridge on “Louie, Louie” while backpedaling with a tuba on a wet field. Maybe, Tim Tebow will burn his last year of eligibility with the band instead of the Gator football team! Just pick up the piccolo, miss a note or two of whatever “Earth, Wind and Fire” song they’re playing and then proclaim: “I promise you one thing. A lot of good will come of this! You will never see any piccolo player play as hard as I will for the rest of the season.”

Look, I’m sure being in the band requires some dexterity. Just don’t tell me they’re as athletic or working as hard as the guys playing the game. They’re not! Given the choice, no one picks being in the band over the being on the team. What’s next?! Cheerleading is as tough as line backing?! Tailgaters are more athletic than tailbacks?! Pssst…Pleease!”